Happy 1st Birthday to you, Oscar. We decided to feature this country-living, snout-alicious piggy on his very special day!!!! Twelve months old to the day and 27 pounds of love, this little guy comes to us from the midwest. Oscar happily resides in Kansas with his Mommy, Daddy and their 10-year old Boston Terrier, Rylee. 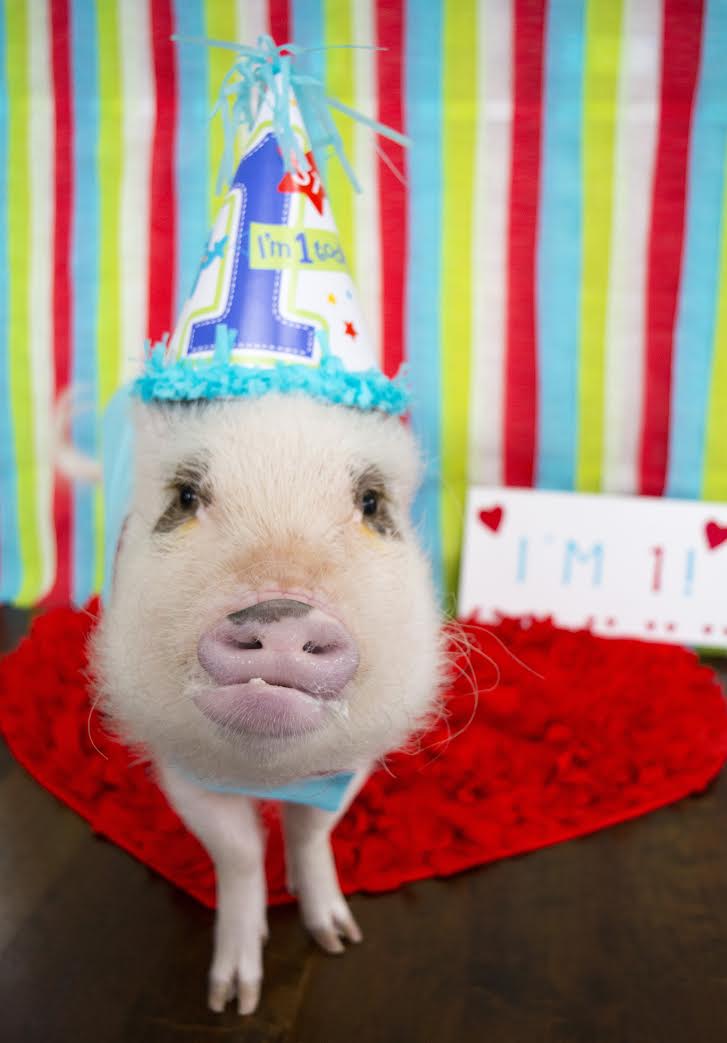 PE🐽NY: When did you get Oscar? We got him in May, 2015. We planned on moving to the country someday and wanted to wait until then before adding a pig to our family. We finally got the chance to move into our country house in April of that year. Although we planned on waiting at least several months to settle in before getting a mini pig, Oscar became available on a breeder site I had been watching for a long time and my husband and I decided Oscar was the one for us. It was a little stressful getting settled into a new house with a piglet, but we are so glad we picked him. Oscar was five weeks old when we picked him up.

PE🐽NY: Did you always want a mini pig? No, I have not, mainly because it just never occurred to me that I could have a pig as a pet. Growing up, I only thought of cats and dogs as pets. Surprisingly, my husband is the one who always wanted a pet pig. He grew up in rural Kansas and had more exposure to farm animals, and he decided when he was young that he wanted a pig someday. Being an animal lover, I was completely on board, especially having researching them as pets!

PE🐽NY: Where did you get Oscar? I researched and “watched” breeders online for a few years before we decided on Oscar, and choosing a breeder was a difficult decision. I narrowed down a few, with preference to those in close proximity to us, and then kept my eye out for the right piglet and a breeder I was really comfortable with. I’ve chosen to not mention his breeder, as he had mange when we got him. Aside from Oscar’s mange, we have been really happy with our choice.

PE🐽NY: What is mange? How did you have to treat Oscar? Did you have to treat your dog? Sarcoptic mange is caused by mange mites and is spread from one pig to another, either from direct contact or from surfaces recently contaminated by the mites. Since Oscar came home with mites, I assume it was spread from the other pigs while he was with the breeder. We noticed during his first few days with us that he was extremely itchy and wanted to scratch on everything. Pigs are itchy animals in general, but Oscar was obsessively itchy. We took him to the vet, and he had a skin scrape done which basically checks his skin for mites. The vet confirmed that he had mites on him, so she gave us three doses of oral Ivomec and instructed us to give each dose 14 days apart since that timing coincides with the life cycle of the mites. We were also instructed to wash his bedding and vacuum after each dose. Oscar started to show improvement after the second dose and the mange appeared to be gone after the third dose since Oscar was no longer as itchy. Unfortunately, Oscar was somehow reinfected and the mange came back. This time it was worse; he had sarcoptic mange and a secondary staph infection. Our original vet was out of town this time, so we took him to a different one. This vet took a very different, much more thorough approach to the mange. This time Oscar received three Ivermectin injections, each 14 days apart, for the mange, an antibiotic every 12 hours for two weeks for the staph infection, we kept him isolated in one room of the house away from the dogs and us for the entire treatment period, and used a perimeter spray around the house at least once a week to kill any mites remaining in the house. We also washed his bedding every day and treated our dog for mites using Revolution. We were given the option to treat our dog for mites even though it was highly unlikely that she also had mange. Since mites are typically host specific and also since Oscar and Rylee weren’t sharing bedding or blankets at that point, we didn’t have to treat Rylee but did proactively just to make sure the mites were completely gone. After a very long six weeks of cleaning, disinfecting, and having poor Oscar in isolation, we finally got rid of his mange!

PE🐽NY: What does Oscar like to do? Oscar is a very simple pig. He likes to eat, eat grass, root and cuddle. If he could do those things all day long, that would be perfect for him. 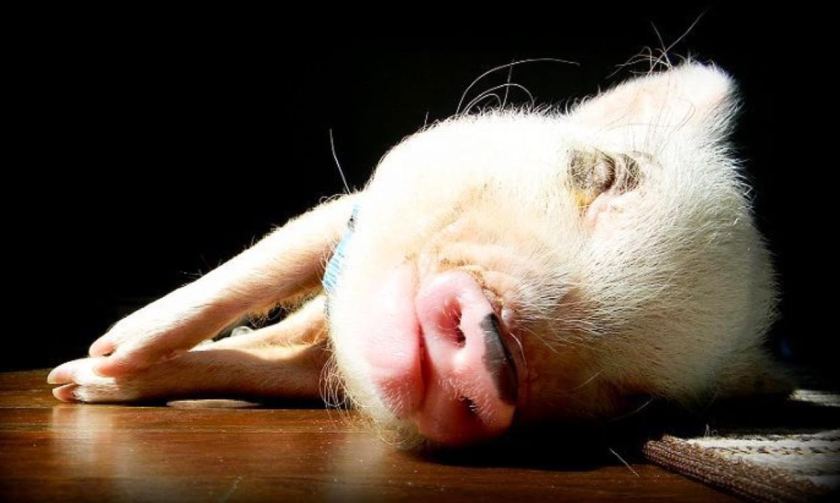 PE🐽NY: Where does Oscar sleep? We have a large crate for him with a bed and blanket that we warm up in the dryer for him before bedtime. We plan on letting him move from his crate to his own bed soon. He has slept in our bed a few times, but he likes to snuggle in really tight and then kick me with his hooves every few hours, so I don’t get much sleep.

PE🐽NY: Can Oscar do any tricks? I started clicker training Oscar when he was really young, so he knows how to circle, sit, shake, jump and wave. Wave is my favorite so far because it’s so adorable. He LOVES training time. It’s a chance for him to earn treats, and I love it because it is a nice bonding activity for us.

PE🐽NY: What does Oscar eat? Favorite snacks? Oscar loves Cheerios, apples and peanut butter. He eats Mazuri mini pig pellets for his main meals in the morning and evening, and gets a salad for lunch. His salad mostly consists of kale and any veggies I have around, like carrots and celery, and I also add some coconut oil treats (which he learned from you, Peony!!!) and a small amount of fruit, typically blueberries. Oscar gets really excited about salads; however, he’s not picky about food. We still haven’t found a food he doesn’t like.

PE🐽NY: Do you work? If out of the house, what does Oscar do during the day? I am fortunate enough to be at home with Oscar all day. He has developed a surprisingly structured routine to his day, and he very much dislikes when it changes.

PE🐽NY: What is you favorite part of having a pig? Oscars’s cuddles. When he cuddles, he snuggles in really tight and stays there as long as he can (or until he hears the fridge open). There’s just something special about the way a pig cuddles.

PE🐽NY: What has been the biggest challenge? The emotional roller coaster of owning a pig. Oscar is SO loving and sweet, but we have also struggled with his aggression. I have talked openly about his aggression on my blog because I want people to understand the challenges that can come with mini pig ownership. We have been using “Move the Pig” with Oscar over the past few months, and we have seen significant improvement in his behavior. Understanding that pigs are hierarchical by nature and need to know their place in the household has really helped me to understand why Oscar is being aggressive at times and also why “Move the Pig” is effective. Despite that, I put so much time, energy and love into Oscar that it’s really difficult when he tries to bite or snap at me. A minute later he can cuddle up next to me and completely melt my heart again. I have never experienced so many highs and lows with a pet before!

PE🐽NY: Any surprising pig facts? While many pigs love water, others hate it. Oscar is a pig who hates water. We bought him a little plastic pool last summer and put some water in it expecting him to love it, and he got scared and jumped out. If there is ever any water on a sidewalk or concrete, he will walk all the way around it to get where he is going.

PE🐽NY: Any advice for those wanting a pig? Do Your Research! Pigs are adorable, but a lot of work. We have had an overall positive experience with Oscar and wouldn’t trade him for the world, but we also researched for several years before deciding to finally get a pet pig. The biggest piece of advice I can give to anyone who wants a pig is to make sure everyone in your home is 100% on board. Pigs can be very noisy and disruptive to an environment. People give up pigs (all the time) for reasons that could have been avoided with some simple research. Giving up a pig, or any pet really, can really affect them, and it breaks my heart.

PE🐽NY: Your blog is awesome! What inspired you to start it? When I was researching mini pigs before we decided to get Oscar, I wanted to know what daily life was like with a mini pig. After years of researching, I knew what they ate, how to care for them, and other facts like their life span, but I still didn’t really know what to expect on a daily basis. So, I started LifeWithaMiniPig.com as a place to discuss what my life was like now that I had a mini pig. My goal was to be honest and share both the good and bad of having a pet mini pig. I have found SO many amazing pig parents who have helped me along the way and have reached out to me when I was struggling with Oscar’s mange and his aggression. The blog has helped me connect with an amazing group of pig owners, and I’m extremely grateful for the wonderful people I have met along the way.

Happy 1st year of many, sweet Oscar! We adore you!!! Every single time we see pictures of you (by the way, your Mama is an oink-mazing photographer) our hearts seriously SMILE. Thank you for being a wonderful pig and for choosing such an amazing family – and thank you to your family for choosing you! All of the education you and your Mama provide for us is priceless, helpful and inspiring. Thank you, most of all, for being my Outstanding Pig of the Week. Love, PE🐽NY

"Primate and elephant and even pig societies show considerable evidence of care for others, parent-child bonding, solidarity in the face of danger, and so on."